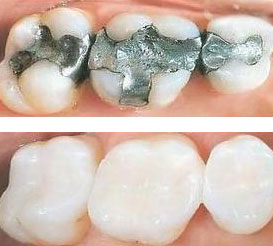 It is now a well known fact that amalgam fillings, commonly known as silver fillings, which were once frequently practiced at dental hospitals and clinics across the world, contained an element that is toxic to humans – Mercury. Even though mercury was present in these fillings in a minute quantity, it still posed a number of threats to patients, and to the environment. Over the years, a number of mercury toxicity cases have been reported; additionally, issues related to improper mercury-containing amalgam disposal have also alerted authorities. As a result, most countries of the world have imposed a ban on amalgam fillings in an attempt to prevent health and environmental hazards.

Today, composite resins and glass ionomer cements are being used as materials of choice in the field of restorative dentistry. Not only are these materials entirely mercury-free, they also possess a number of other properties that make them much better than conventional amalgam fillings. Some of these properties include:

With all these properties and more, composites have become the materials of choice for leading dentists across the globe. Available in a large variety of shades, these materials can match the exact color of the natural dentition making it difficult for an observer to tell the difference. With amalgam now banned, GIC and Composites have taken over the world of restorative dentistry and will maintain the position for years to come, till they are replaced by better, more versatile materials.

Learn all about the different benefits of mercury-free fillings and get a restorative consultation today! Book your appointment at Westlake Hills Dentistry – we’re always just a call away!